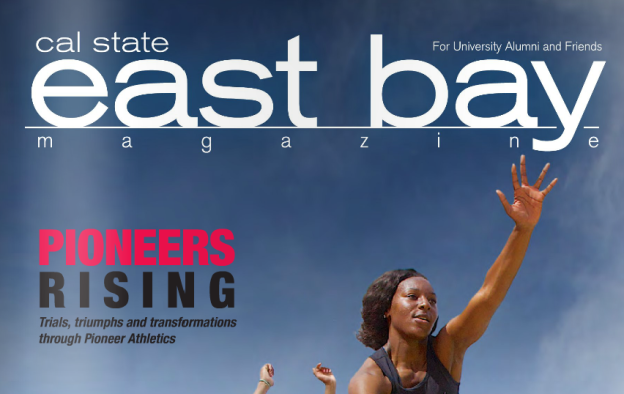 I’m pleased to share the news that the Spring 2014 issue of Cal State East Bay magazine is now online. I have two articles in the issue: a profile of father-daughter track stars Marcus and Lauren McGlory, and four vignettes on former student-athletes who credit their success in life on their participation in Pioneer athletics: Lori Stilson-Armstrong, Frank Fudenna, Rich Sherratt, and brothers Don and Mark Sawyer.

(Another one that’s lost a bit of its currency, though this is an annual event. This was my first post on the Actuate blog on April 8, 2014.)

This weekend—April 12 – 13, 2014—marks NASA’s second International Space Apps Challenge. Online and at almost 100 sites around the world—from Athens, Greece, to Zaragoza, Spain—volunteer developers, makers, and scientists will collaborate in an intense 48-hour marathon to create solutions based on 40 different challenges posed by the American space agency.

Some of the challenges involve hardware, while others are purely software development projects. This year, the challenges range from creating a greenhouse design (for growing food on Mars) to developing an app to display the force of gravity anywhere on Earth.

It’s April 15, and in the United States that means one thing: Taxes.

Federal income tax returns are due with the Internal Revenue Service, or IRS. The IRS says about 35 million Americans have waited until the final week to submit their tax returns this year, so lots of us have taxes on the brain right now.

Being taxman isn’t a job for the insecure. In 2013, 40 percent of Americans had an unfavorable view of the IRS. But love ‘em or hate ‘em, the IRS is a data geek’s dream source. By law, huge volumes of tax data are public record and available online. It’s yours to play with; after all, you paid for it.

Read the whole thing at: http://blogs.actuate.com/visualizing-tax-day-2/

Hockey’s Stanley Cup playoffs began last Thursday, and most hockey fans –particularly those whose teams are in the hunt – are in heaven. But hockey fans who also are students of analytics and data visualization are in a sort of purgatory, because hockey lags behind other sports in adopting advanced statistical analysis of players and teams. Put another way: There’s no Moneyball for hockey.

Don’t take my word for it.  A panel at last month’s MIT Sloan Sports Analytics Conference (called Hockey Analytics: Out of the Ice Age) noted that the rink “remains a less-than-forgiving climate for perfected analytical judgment and implementation.” That’s changing, though: Conference organizers also said “in-depth statistical analysis has permeated the front office of NHL teams” and noted that fans are getting in on the data action.

Read the whole thing at: http://blogs.actuate.com/what-can-hockey-learn-from-iot/

(Actually, it’s more than seven — we’ve added a few in the comments.)

We all know data science is an important (and growing) field, but most of us don’t have the time or money to study it full-time at a university. But take heart: We’ve found seven free or inexpensive options for data science training.

Many of these are high-level, theoretical courses, not specific programs to train you on data science tools. All the courses require some knowledge of statistics, programming, and data concepts (and one of them requires a lot more), so read the fine print.

“If you’re betting on a correlation and don’t know the causality, I’ll bet the other side.”

That was just one of the gems – part one-liner, part deep insight  – delivered by data journalist Nate Silver in a talk at Cal Performances in Berkeley, California on Sunday afternoon, May 4, 2014.

Read the whole thing at: http://blogs.actuate.com/lessons-from-nate-silver/

Late in March I stepped off the freelance treadmill and took a job with Actuate, a software company that makes tools for Big Data and personalized analytics. It’s been a great move, with interesting, smart coworkers and enjoyable professional challenges.

But having a real job—my first in nearly 18 years!—has meant even less time for blogging here. Fortunately, I’ve been blogging at least weekly at the new job. I intend to cross-post here as circumstances permit. But if you want to comment, I hope you’ll do so at the Actuate blog.

“A wireless LAN can enable your employees to do their jobs more quickly and efficiently, allowing them to be more responsive to customers. Convenience is a major business reason for using a wireless network, says Craig J. Mathias, a principal with Farpoint Group, an independent wireless advisory firm. “Getting access to information and acting on it in a timely fashion is one of the last competitive differentiators,” he says.

In 2006 I wrote “Seven Steps to Wireless” for Cisco’s iQ magazine. Hard to believe how much has changed since then; wireless LANs (WLANs), then a relative rarity, are ubiquitous now. Eight years ago, organizations actually needed advice such as “Evaluate network infrastructure. Can your switches and routers handle wireless access point traffic?” and needed to be coached on various flavors of wireless security. (Well, they probably still ought to think harder about security, but rightly or wrongly that onus increasingly falls on users.)

My eight-year-old piece is perhaps timely today given the revelations from the Olympic Winter Games in Sochi that the Russian security apparatus can spy on wireless communications, including WiFi and mobile phone networks. In such a case, the dilemma facing users is daunting but age-old: Armor up, increasing complexity and reducing convenience for the sake of personal privacy? Or suck it up and let them snoop, in exchange for speed. I’m interested to see what visitors to Sochi will choose, and if we’ll even know what they choose.

Go Daddy’s much-hyped 2014 Super Bowl commercial featuring a woman named Gwen quitting her job as a machinist to launch a career giving puppet shows may be an interesting TV drama, but it’s a poor idea.

Now, many of us have felt the urge to leave steady jobs to go into business for ourselves. I did it myself, nearly 20 years ago, when I left Sunset Magazine in 1996 to be a freelance publishing consultant, writer, and editor.

The difference between Gwen and me is that I left my job on good terms. I didn’t quit on national television, and if had been given a chance to do so, I would have passed. Why?

END_OF_DOCUMENT_TOKEN_TO_BE_REPLACED

My article about wild turkeys, which appeared in the short-lived MyHomeMyTown magazine in late 2003, is reproduced here. My friend Bill Crosby, editor of MHMT, let this fabulous headline stand:

At first glance—maybe out a car window along an East Bay road—they look like rocks or tree stumps. Definitely too big to be birds. A closer look reveals wild turkeys, scratching for a meal.

They’re a thrilling—and increasingly common—sight. The wild turkey population in North America has quadrupled to more than 6 million in the last 30 years, according to the National Wild Turkey Federation. And though turkeys aren’t native to the state, some of that growth has been in California; indeed, turkeys can be found in every California county except San Francisco.

Once the birds are established, their population growth is a matter of biology and arithmetic.